For the past four years, Spanish architect Lluís Alexandre Casanovas Blanco worked closely with his mother, Maria Lluïsa Blanco Estébanez, to develop the intriguing ‘UMT’ chair. Sporting a minimalist black frame and a delicate lace-made backrest and seat, the chair is both a furniture piece and a historical investigation into the politics of traditional weaving techniques, particularly the use of bobbin lace in decoration.

‘The project looks at this technique as a way to acknowledge under-recognized domestic traditions edited out from modern architecture. It refers to the use of craftsmanship and DYI construction techniques in domestic spaces––a gendered form of labor usually overlooked in male-centered architectural narratives,’ explains the architect,’ explains Blanco.

Specifically, the architect replaced cotton yarn traditionally used in ancient bobbin lacemaking with high-resistance, state-of-the-art fiber Dynemaa®. Advertized as the world’s strongest fiber, this material is commonly found in military equipment and scientific expeditions, as its resistance adapts well to extreme environmental conditions. Incorporating such a high-strength fiber, the ‘UMT’ chair converts a historically decorative complement, the bobbin lace, into a key structural element that can carry the weight of a person’s body. 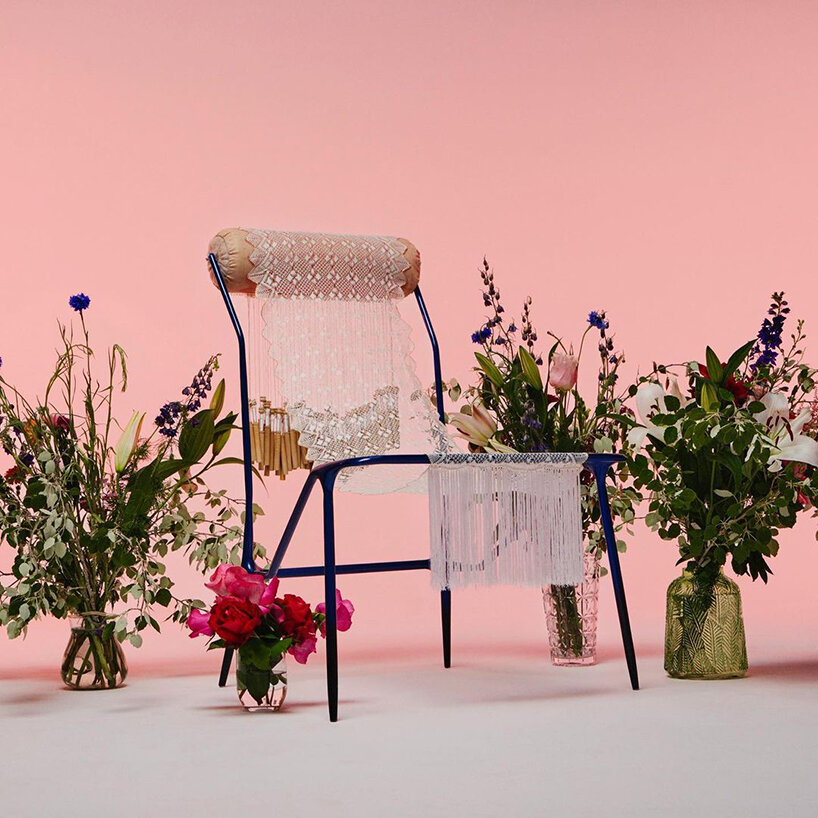 Blanco’s project starts from a series of material essays first tested in his ‘Real Estate Boom House’ work (2018), awarded both a Bauwelt Prize and a Simon Prize. This research looks into traditional craft techniques linked to agents other than heterosexual men. Despite their fundamental contribution to modern housing construction, women and queer individuals, and others, have been overlooked in both architectural production and its history.

‘The project, which uses the Spanish context as a case study, explores bobbin lace in tablecloths, rugs, curtains, and many other textile elements as key in configuring contemporary domestic interiors in Spain and elsewhere. In this country, this phenomenon remains inextricably linked to the backward steps in gender equality undertaken during the Francoist dictatorship (1939-1975). ‘UMT’ subverts the historical consideration of bobbin lace as ‘ornamental’ and ‘superfluous’ in architectural production by making the lace the main structure of an essential, male-associated element in design history: the chair,’ the architect adds.

In line with his histo-political investigation, Blanco chose the name ‘UMT’ to reference both an acronym for ‘Universal Military Training,’ and the Spanish phrase ‘Una Mirada Tranquila (A Quiet Look),’ nodding to a description of the fascist women’s magazine ‘Y: Revista para mujeres’, associating the production of bobbin lace to a state of relaxation and transcendence. 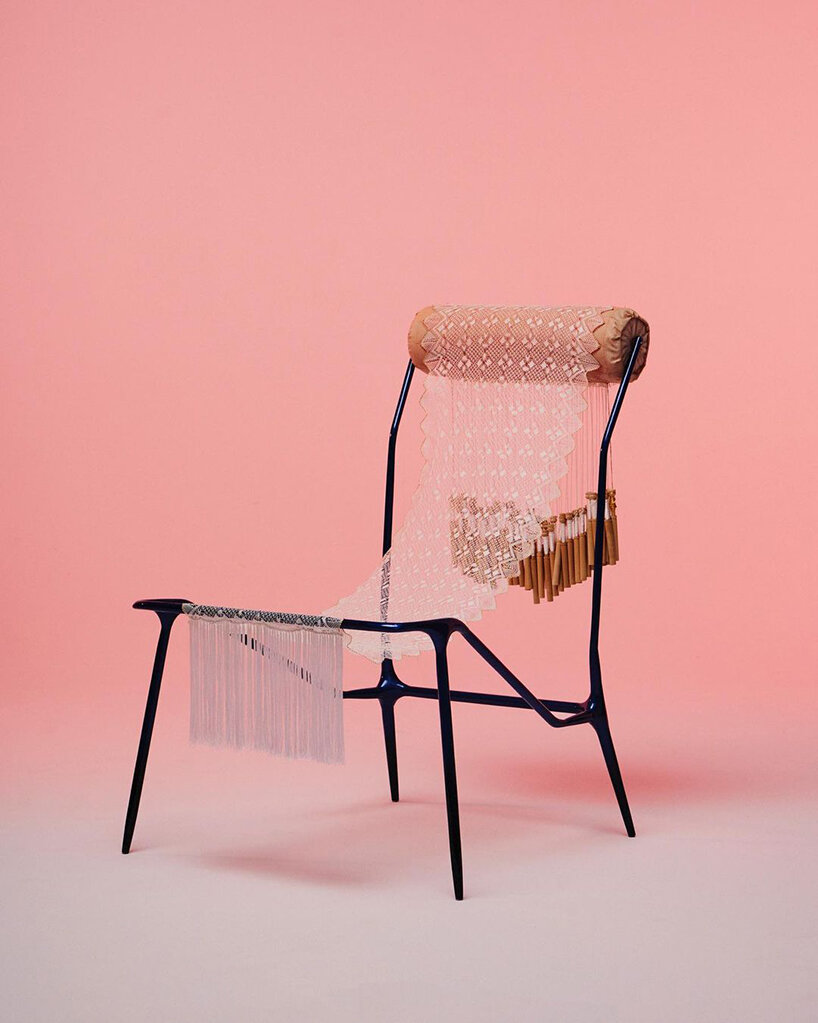 María Luisa Blanco knitted the ‘UMT’ chair’s backrest and seat for over three years. As an elementary school teacher by profession, she was forced to learn bobbin lacemaking as part of the compulsory training for female teachers she received in one of the Sección Femenina (Women Section) schools of the Spanish fascist party in 1963. The weaving follows a pattern combining the most characteristic types of bobbin lace stitches, including the ‘half moon,’ the ‘little fish,’ the ‘three-legged spider,’ and ‘Ulrike’s star,’ amongst others, with the final design becoming a sort of technical archive.

The resulting design incorporates a weaving cushion, 24-carat gold-plated needles, and wooden bobbins, all becoming part of the chair. The cushion takes its shape and proportions from the pillow of the classic LC4 Chaise Longue by Le Corbusier, Pierre Jeanneret, and Charlotte Perriand, whose involvement in making this classic modern piece of furniture has been historically overlooked.

To emphasize the lace-made backrest and seat, the structure was reduced to a minimalist expression, following a geometry resembling that of an arachnid’s body, an animal with which women who make bobbin lace are often associated. 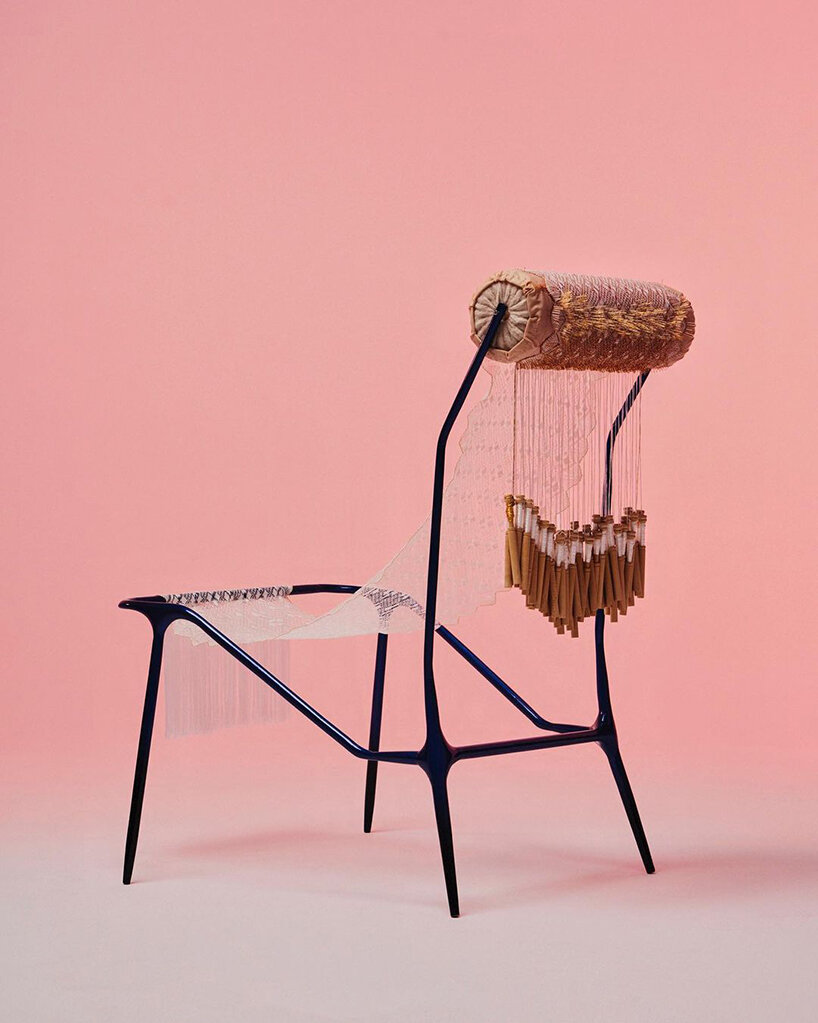 a weaving cushion, 24 carat gold-plated needles, and wooden bobbins all becom part of the chair


As a complement to the object, the ‘UMT’ chair also includes a curtain reproducing an illustration from the 1946 ‘Marujita’, a book series compiled for little girls. The illustration in the curtain comes from a story called ‘El Encaje de Bolillos(Bobbin lace),’ a perfect example of Francoist cursilería (cheesiness) that connects the virtuosity of bobbin lacemaking with spiderweb weaving. This simile links biology and gender through a discourse suggesting the direct relationship between instinct and domestic manual labor.

‘Ultimately, in UMT, bobbin lace is not considered, as a neutral and depoliticized technique, but as a political activity whose celebration and study is fundamental to understand how we have built our houses during the last century,’ concludes Blanco. 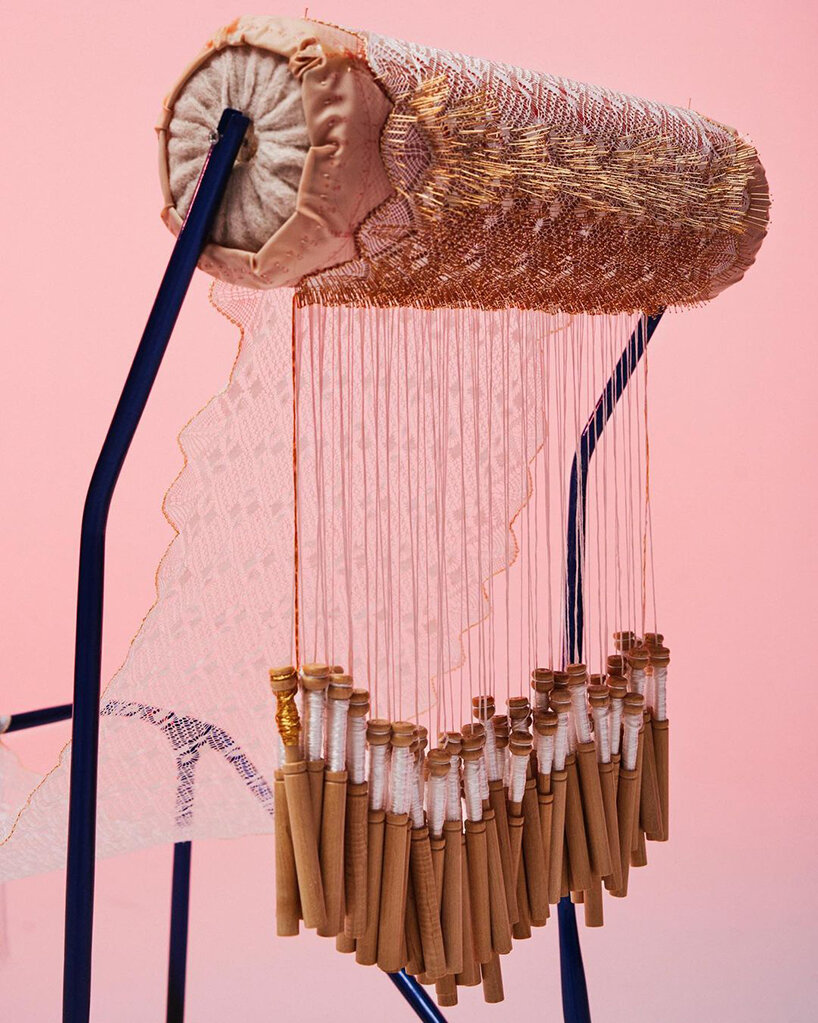 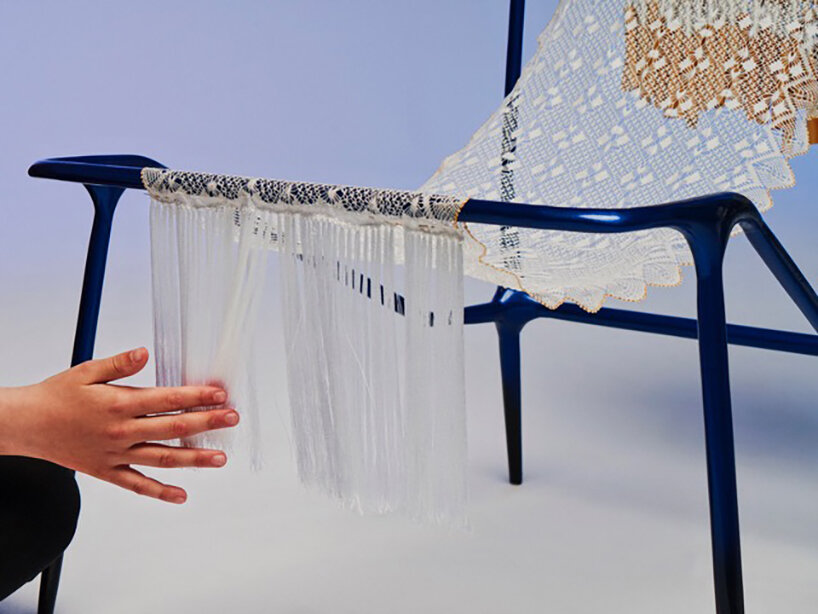 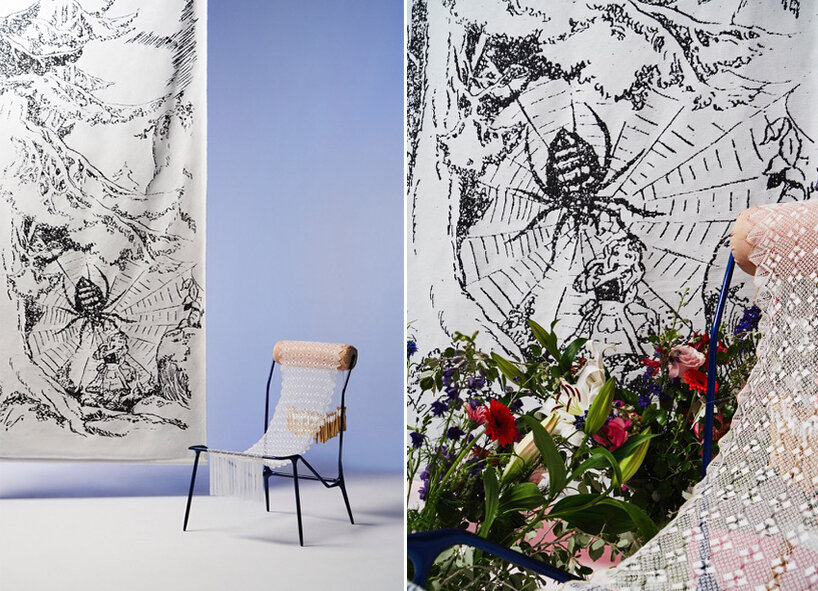 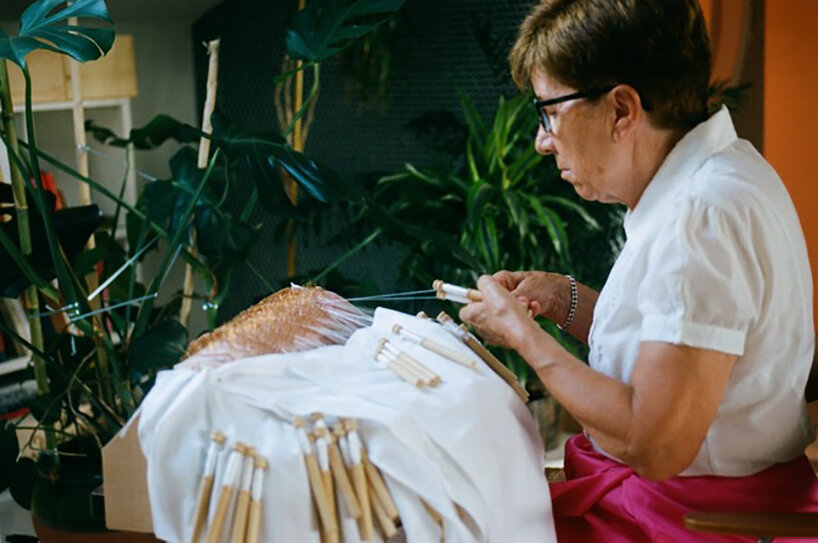 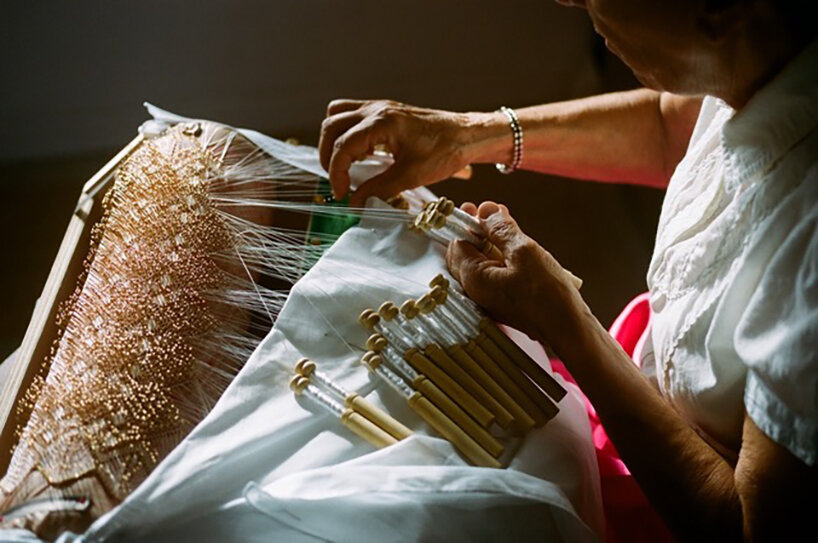 the project explores the politics behind traditional weaving techniques

November 28, 2022
Revenge prank at Stoke City, paying £3 subs to play and scoring in a Europa League final: Seventeen things you may not know about the new Crawley Town manager and his assistant – SussexWorld

Revenge prank at Stoke City, paying £3 subs to play and scoring in a Europa League final: Seventeen things you may not know about the new Crawley Town manager and his assistant – SussexWorld