Businessday Ng –
The conclusion of the All Progressive Congress (APC) presidential primary last week, with the emergence of Asiwaju Bola Ahmed Tinubu as its presidential candidate, largely marked the end of the presidential primary season. About the same time, the New Nigeria People’s Party (NNPP) concluded its presidential primary, and as expected, elected Rabiu Kwankwaso as its flagbearer. In the week before, the People’s Democratic Party (PDP) voted Abubakar Atiku as its presidential candidate and the Labour Party (LP) picked Peter Obi, former governor of Anambra State and until a week before then, a presidential aspirant of PDP as it flag bearer in the 2023 elections.
Ahead of the June 17th deadline for the upload of the candidates’ details on the portal of the Independent National Electoral Commission (INEC), the most critical activity this week will be the nomination of Vice-Presidential Candidates. Both the ruling party and the PDP have a high-level political conundrum to deal with. APC will have to decide whether it feels Nigerians, especially the Christian community, will accept a Muslim – Muslim ticket, while the PDP will seek a candidate that can neutralise the growing popularity of Peter Obi across the country, especially in the Southeast, a section of the country that have largely voted PDP since 1999, and never had a presidential candidate in any major party.
For electoral purposes, it is easy to understand why the APC will want to choose a Northern Muslim as its Vice-Presidential candidate. The pool is wide, and the political capacity is robust. However, many will think it smacks of one of the greatest political insensitivities in Nigeria’s political history. In the eight years since Muhammadu Buhari became President, Nigeria has become intensely polarised along ethnic, religious, and regional lines. The APC, as the ruling party, deliberately ignoring that by choosing a Northern Muslim as its Vice-Presidential Candidate will further reinforce the perception that it is a protagonist “Muslim” party.
As recently analysed by my colleagues here in BusinessDay, based on the work done by VIISAUS (See https://businessday.ng/big-read/article/emergence-of-voting-blocs-northern-alliance-bible-belt-and-rockies/, there are now three distinct voting blocs in Nigeria. There is the Northern Alliance, comprising 11 States – Gombe, Sokoto, Jigawa, Zamfara, Kano, Kebbi, Bauchi, Katsina, Yobe, Bornu and Osun States. Osun is the outlier. They are the country’s most active voters when measured by voters turn out, with an average of 41%. There are also the Bible Belt and the Rockies, but the details are not required for this analysis. The most important thing to note is that the PDP has not won in any of these States in 19 years. What do they have in common? They largely vote on the basis of “Buhari” and religion. For APC therefore, given that Buhari will not be on the ballot next year, it is important for them to have a strong Muslim Vice-Presidential candidate to retain those States. 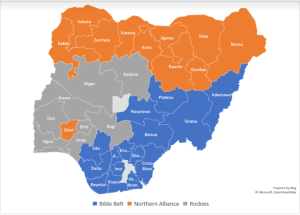 Figure 2. The three voter’s categories – The Northern Alliance, the bible belt, and the Rockies
For PDP, the question is about clout and a Vice Presidential Candidate that can make a difference. It is largely conclusive that the candidate will emerge from either the South South or the South East. In the South South, the most likely candidate is the current governor of Delta State, Ifeanyi Arthur Okowa. The other candidate from the region is the Rivers State Governor, Ezenwo Nyesom Wike, who came second at the primaries. Another contender is the current governor of Akwa Ibom State Udom Gabriel Emmanuel. As said before, the conundrum is how to choose a candidate that, at best, helps reinforce the PDP’s position in the South East and South South by encouraging a strong turnout for the PDP in those regions.
Q: In the eight years since Muhammadu Buhari became President, Nigeria has become intensely polarised along ethnic, religious, and regional lines
For Peter Obi of the Labour party and Rabiu Kwankwaso of the NNPP, the choice of Vice-Presidential Candidates will be most interesting. Particularly for Obi, it may give the strongest indication yet of how he sees his chances and the scope of his expectations for the 2023 elections. Indeed, rumours were rife after he left the PDP that he was going to team up with Kwankwaso, as that would have provided a strong platform to build on the Kwankwasiya movement in the North, starting with the about 5 million votes at stake in Kano.
Given the developments since the Presidency changed hands eight years ago, the 2023 presidential election is increasingly becoming a very critical one for Nigeria. The changes to the electoral law, especially the signed Electoral Act of 2022, replacing that of 2010, is poised to make the 2023 elections very interesting, in two major respects. First is the Permanent Voters Card (PVC). Before the PVC, the constant electoral cycle registration was a cesspit route to corruption and rigging, underscored by multiple voting. On the back of the card reader in 2015, President Muhammadu Buhari beat an incumbent President and marked the first time that happened in Nigeria.
For the general elections next year, INEC has developed a new technology for the process. The Bimodal Voter Accreditation System (BVAS) is touted to reduce multiple voting through improved verification of PVCs and the uploading of results real time on election day. However, reports from its use in Isoko South 1 constituency election in September 2021, the Anambra State governorship election November 2021 and the recent FCT Area council elections of February 2022, point to a slow and poorly functioning system. The system will be further tested in the Ekiti and Osun gubernatorial elections before the general elections next year.
Now, in 2023, whoever becomes President, will inherit an economy that is less in size compared to that of 2015. In that year, the size of the Nigerian economy in current US dollars was US$546.68 billion and using 2021 figures, it is about US$436 billion. In eight years of President Muhammadu Buhari, he has presided over an average GDP growth of less than 1 percent, two recessions, and declining per capita income. The new President will be confronted by the largest domestic and external debt in Nigeria’s history, a relentless security problem, and a polarised nation.
Also, following from Covid–19 and the war in Ukraine, the United Nations released a report highlighting three dimensions of the present global crisis – food, energy and tightening financial conditions. The report – Global Impact of War in Ukraine on food, energy, and finance systems released April 2022, is the latest to show the devastating effects of the ongoing crisis on many developing countries, including Nigeria. These problems will be there in 2023.
In the coming series, we will look into other dimensions of the economics and politics ahead 2023. By the end of this week, the Vice-Presidential candidates will be known. After that, the focus will move onto how each of the candidates seeks to deal with the challenges of security, economy and poverty, structural issues and federalism. We will look into the manifestos, programmes and policies of each of the candidates, and also provide some context of shifts in the Northern Alliance, the Bible Belt, and the Rockies.
Get real time updates directly on you device, subscribe now.
Tinubu will chose a running mate who can guarantee his victory – Uzodinma
Atiku to unveil Wike as running mate
Why many lawmakers lost return tickets – Gbajabiamila
CVR: INEC creates 25 additional registration centres in Anambra
Get the best of world News delivered to your inbox daily
latest news
Manufacturing in Nigeria can be frustrating – Daily-Need MD
Tinubu will chose a running mate who can guarantee his victory – Uzodinma
Economics and Politics 2023: The state of play (1)
Angola overtakes Nigeria as Africa’s biggest oil producer
Atiku to unveil Wike as running mate
Business Day, established in 2001, is a daily business newspaper based in Lagos. It is the only Nigerian newspaper with a bureau in Accra, Ghana. It has both daily and Sunday titles. It circulates in Nigeria and Ghana
BDlead
Economics and Politics 2023: The state of play (1)
Angola overtakes Nigeria as Africa’s biggest oil producer
Atiku to unveil Wike as running mate